Alcohol consumption can impact our health in different ways; including how our brain functions in both the short and long term. In this blog, Dr Tony Rao, Visiting Clinical Research Fellow, at the Institute of Psychiatry, Psychology and Neuroscience, examines the latest evidence of the link between alcohol consumption and dementia.

When we started to compile the evidence base for alcohol related harm in older people at the Royal College of Psychiatrists just over 10 years ago, I put in a paragraph that suggested older people should drink less alcohol than younger people. Our Invisible Addicts report based the suggestion on guidelines for “at risk” drinking from the National Institute of Health in the United States.

Little did we know that, in the words of Maximus Decimus Meridius, the report would unleash hell. It led to a media furore around drinking in older people, but it was also a catalyst for change in policy. Later that year, the House of Commons Science and Technology Committee launched an inquiry into the UK drinking guidelines and the rest is history. These revised guidelines define “low risk” drinking as no more than a total of 14 units of alcohol per week for both men and women, with some additional caveats around drinking patterns. But the story around alcohol and older people does not end there.

The impact of heavy drinking on the brain is well known, with Wernicke’s encephalopathy and Korskoff’s Syndrome (WKS) representing acute and chronic forms of what is known as amnestic syndrome – characterised by impaired long term memory, disorientation and creating false memories termed “confabulation”. WKS arises from long term deficiency in Vitamin B1, also known as thiamine.

When I started as a consultant 25 years ago in an area of high alcohol related harm in older people, I became struck by the number of people who presented with problems that went far beyond memory impairment. I then started to look more closely at the relationship between alcohol and the brain. Was there a direct effect of alcohol on the brain that did not involve thiamine? There was. And I had my own research evidence to support it. In 2016, I published an article based on people referred to my older adult mental health service who drank above the previous sensible limits and who were assessed for cognitive impairment. Although I was not the first to uncover this, there was a characteristic pattern of dementia that differed from Alzheimer’s Disease in that it still affected memory but had very little impact on language. Since then, recognition that alcohol use is associated with cognitive impairment that goes beyond WKS has grown rapidly.

Over the past five years, the story has continued to unfold. In 2017, a landmark paper found that drinking between seven and 14 units of alcohol a week was associated with a smaller brain size compared with non-drinkers; with poorer performance on memory tasks. This finding was replicated three years later, with the same association found with drinking below low-risk drink limits. You would think that was progress enough, but there’s more. Alcohol related dementia is now classified separately in the most recent version of the International Classification of Diseases. What is more, alcohol related dementia also differs from more common types of dementia in that it presents with frontal lobe damage earlier than more common forms of dementia such as Alzheimer’s Disease. In fact, by it’s very definition, calling it a dementia may be somewhat of a misnomer, in that abstinence may even partially reverse cognitive impairment.

We know that alcohol use– even in moderation – is associated with damage to areas of the brain key to cognitive function. The question is, are there mechanisms involved? This week, a study was published using UK Biobank data. It assessed just under 21,000 people aged 55 and over to assess the contribution of excess iron deposition in the brain to cognitive impairment. The study concluded that drinking seven units of alcohol weekly is associated with iron accumulation in the brain. Higher brain iron was, in turn linked to poorer cognitive performance. The lead author stated: “Iron accumulation could underlie alcohol-related cognitive decline”. But the jury is still out on these conclusions, as you will see from the commentary I provided on the study.

As a risk factor for disability, alcohol has shown the most rapid rise over the past 30 years for people aged 55 and over compared to other age groups. Studies that have claimed health benefits from drinking remain flawed in their design. Many fall down when comparing drinkers with non-drinkers, as they do not take into account the so-called “sick quitter” effect of people in non-drinking control group who have given up drinking through poor health. The other common flaw is studying healthy older people, who represent a selective group who have remained in good health in spite of alcohol, not because of it. Above all, the most recent study concluding purported health benefits did not assessment cognitive impairment at all.

The bottom line is that to protect the brain from alcohol in older people with health problems, it is safest not to drink at all. In those older people who remain healthy, starting to drink would not be advisable, as alcohol is associated with a range or other physical disorders that balance out any “benefits” seen in the prevention of cardiovascular diseases in some groups.

If you have experienced any of the issues raised in this post and are in need of information or support, you can visit the  Drink Wise Age Well website, which has a range of  information for carers.

They also have a helpline exclusively for over 50s to provide guidance and support around drinking 0808 8010750.

More information about alcohol and dementia can be found on the Alzheimer’s Society website. 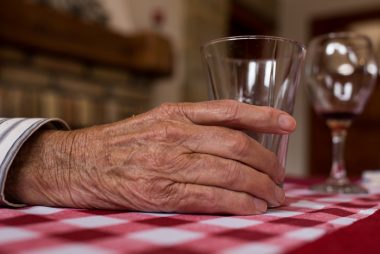 When I said enough is enough: reducing alcohol related harm in older people