“Megan was my oldest daughter. She was 16 at the time we lost her and would have been nearly 21 now. She wasn’t a typical teenager; she knew her own mind and had a strong sense of morals.

“Megan had a small group of friends and was very loyal towards them but she was a bit of a home-bird really. She’d often stay in with us and we’d watch TV as a family, or she’d be in the kitchen watching her step-father Michael cooking, while chatting away to us. She loved singing and her favourite subject at school was history; she wanted to be a history teacher when she left school.

“She was very excited about the New Year’s Eve party she was going to. It was at her close friend’s house, they had grown up together, and she spent the day deciding what to wear and doing her hair and makeup. She’d been to a couple of parties there in the six months before and I had no reason to worry about her going to this one.” 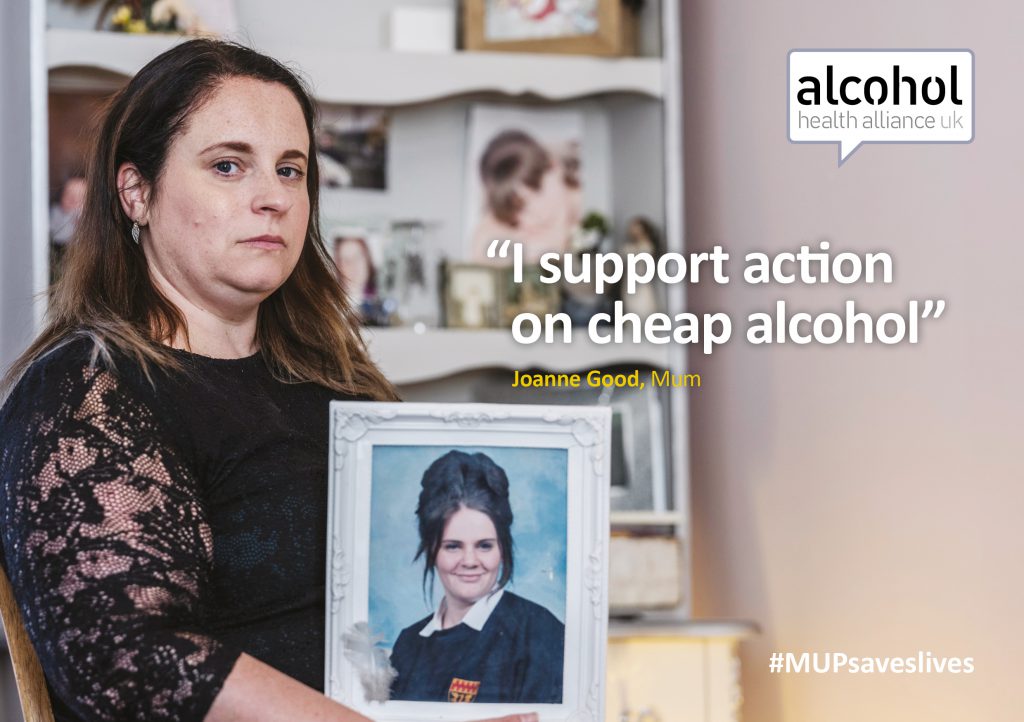 Unknown to Joanne, a guest at the house party had brought strong white cider to the party.

“Megan arrived home in a taxi before midnight – it was around 11.50pm. We were all still up because it was New Year and her brother Aidan saw her getting out of the taxi. We knew she had had too much to drink because she was sick when she got in and she was open and told us that was why she had come home early. But she was also texting her friends, chatting to us about boys and generally seemed her usual self – there were no alarm bells ringing.

“Although Megan could stand up and talk and generally seemed ok, after she had taken herself to bed I went up to tuck her in and I put her in recovery position. I put some cushions behind her back to keep her on her side just in case there was any chance she might be sick again. Then I sat with her until she went to sleep before going back downstairs.”

The next morning, New Year’s Day, Megan didn’t wake up. The coroner’s report later ruled that she had died in her sleep from pulmonary aspiration or ‘dry drowning’. Megan’s stomach contents had emptied into her lungs after the alcohol in her system had prevented the normal preventative gag reflex from happening.

The toxicology report confirmed Megan had drank 1.5 litres of white cider – just half of one of the 3-litre bottles in which high strength cider is usually sold.

Joanne continued: “I went into Megan’s room that morning. She just looked like she was asleep but I touched her and she was cold. We called the ambulance straight away but when they got to us they told us it was too late and that we had already lost her. I laid with her for as long as I could. The shock for the whole family was huge and it still is; my heart hurts every day.

“I struggle with what happened on a daily basis and it’s had a huge impact on myself and my family. I wanted to speak out in the hope that other young people will hear about Megan and I might save another family from having to go through what we have been through.

“I thought that we had done everything we possibly could to educate Megan about the dangers of drinking and to look after her that night.

“No matter what we say to our children, they will always want to experiment. Cheap, strong cider will always appeal because it can easily be bought from their pocket money, and many parents just aren’t aware of the risks. I hope that by sharing the tragedy that happened to us, we can highlight just how dangerous this type of strong cider is.

“I fully support any measure that increases the price of cheap alcohol, including increased alcohol taxes and minimum unit price. It makes total sense to bring in policies which make the cheapest alcohol which causes the most harm more expensive.

“This will help to put children and vulnerable people off from drinking it and will save lives.”