As a specialist in acute medicine, Dr Paul Darragh sees daily the devastating effects of heavy and binge drinking on patients and their families.

A member of the UK British Medical Association (BMA) Board of Science and former Chairman of the Northern Ireland Council of the BMA, he is a long-term campaigner against cheap alcohol, supporting calls for tax increases and the introduction of a minimum unit price (MUP).

“Alcohol harms society, the health service and the individual. As doctors – whether as emergency department doctors, acute physicians, gastroenterologists, surgeons or psychiatrists – we see daily the damage it does to minds, bodies and lives.

“In my job as an associate specialist in Acute General Medicine at Antrim Hospital, I see the irreparable damage alcohol causes to health. I see the damage it does to families and relationships, its role in domestic abuse, how it can lead to violence, and play a role in road traffic accidents.

“The NHS is facing its biggest ever crisis and at a time when it is working to capacity, alcohol places an additional and unnecessary strain on resources. 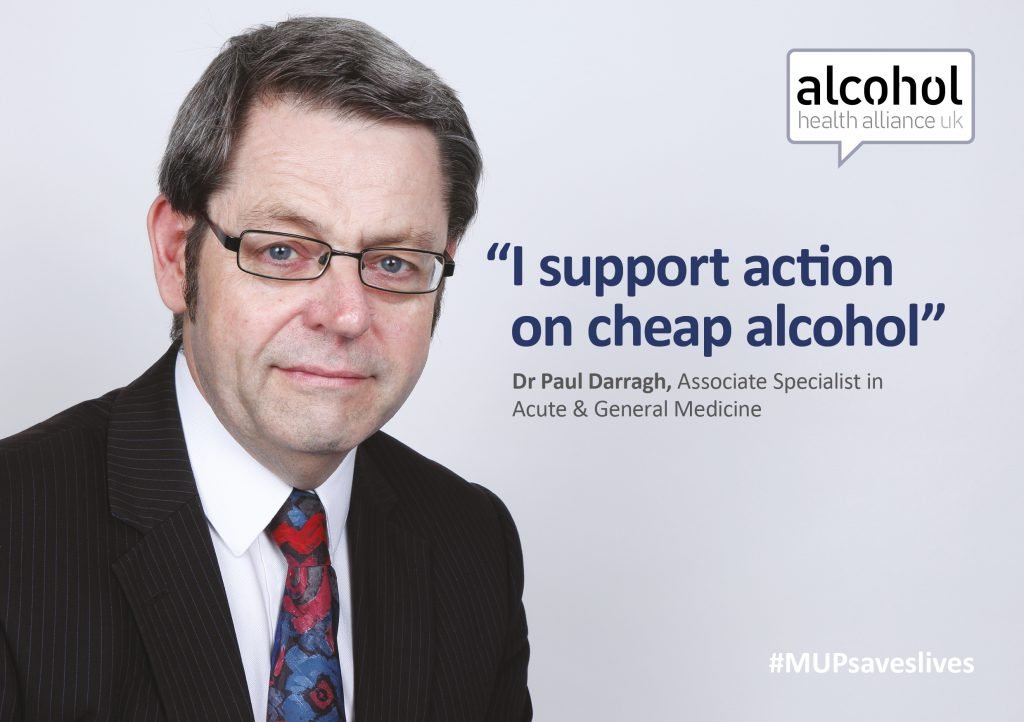 “Alcohol is available for pocket-money prices and can be cheaper than bottled water or fizzy pop – that is scary.

“This widespread availability of cheap alcohol in supermarkets and off-licenses has changed drinking habits and led to pubs closing. The traditional pub culture and the presence of a landlord, often offered a safer environment for drinking, but now there is more drinking at home and pre-loading.

“Education on the dangers of alcohol is extremely important if we are to change the UK’s drinking culture, but this will only take us so far. It is essential that we introduce statutory policies which tackle the sale of cheap alcohol such as increased taxes and minimum unit pricing.

“MUP is proven to be evidence-based, targeted and effective. It would make a difference to the lives of problem drinkers, preventing harm and saving lives, and would be a step in the right direction to reducing the most harmful levels of alcohol consumption.”