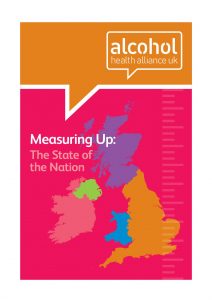 As the Alcohol Health Alliance celebrates its ten-year anniversary, our ‘Measuring Up’ report summarises ‘The State of the Nation’ in relation to current levels of alcohol harm and prevention policies.

It looks back on the past decade of trends, policy change and evidence developments. The report reviews successes and setbacks and compares alcohol policy across the four nations. It examines the strengthened knowledge base and explores barriers to change. It also looks to the future and advocates for the implementation of proportionate, evidence-based policies to reduce and prevent alcohol harm over the next ten years.

Public support for government action is clear, with more than half of the public believing the government is not doing enough to tackle alcohol harm. The ambition that has sustained the public health community has not diminished – to reduce the terrible toll of alcohol-related death and illness on people across the UK and to reduce pressure on already overstretched medical, social care and emergency service workers.