Every Friday and Saturday night, busy A&E departments around the country receive a high number of alcohol-related admissions. Dr Adam Collins, who specialises in Emergency Medicine, sees the harms of alcohol during every shift. He is backing calls to end alcohol tax breaks in the upcoming Budget, to ease some of the pressure on the NHS.

“Alcohol-related illness and injury is a huge burden on the NHS and it has a major impact on people’s lives.

“We see this impact every day in the emergency department, but you never really get used to it. I still feel disbelief at the scale of the issue.

“Patients come into the emergency department with a range of alcohol-related injuries and illnesses. These vary from people with chronic alcohol problems who may be suffering liver or brain disease, to those who have collapsed due to binge drinking or have been injured doing something whilst intoxicated that they would never have done sober. 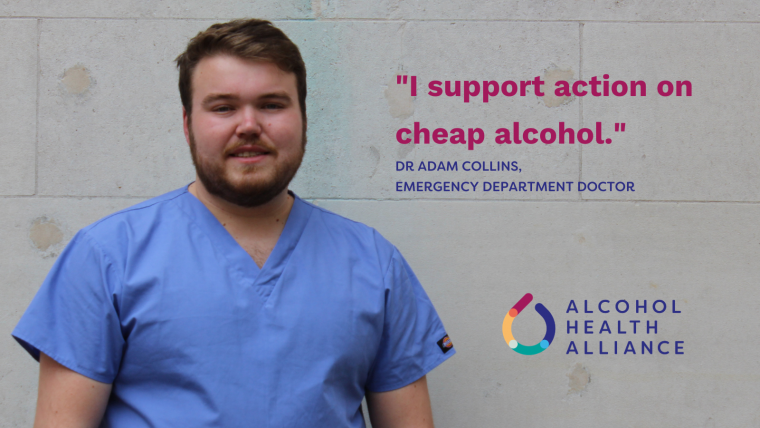 “We also see all too many people brought in by the police and ambulance service, who have been involved in incidents due to alcohol or are in a vulnerable situation because of their dependence on alcohol.

“I recently looked after a teenager who was living on his own, away from friends and family, and who was suffering mental health problems. He was on a fairly minimal income and yet he was still able to access large volumes of cheap alcohol.

“One day, he fell off whilst trying to climb down from a two-storey high bridge. He suffered significant injuries, but didn’t remember anything as he had been drinking heavily at the time. I can’t imagine he would have done any of this sober.

“This is an all too classic example of someone who is in a vulnerable position, which is being exacerbated by the easy availability of cheap alcohol.

“Alcohol is a powerful depressant, sedative and addictive drug. When under its influence, people do things that they wouldn’t do while sober and may cause themselves or others significant harm. I therefore believe it is the responsibility of wider society to do what we can to protect young and vulnerable people from harm. Reducing the availability of cheap, strong alcohol is an important step towards this.”